WFT Chats With Member Bernadette McCarthy About Her New Film

Here at WFT Ireland, we love to celebrate our accomplished members! We got chatting with the multi-talented Bernadette McCarthy about her latest project Love on the Line, which is available to watch now on the RTE Player. A producer, director, actor and writer,  Bernadette is passionate about trying to cultivate more gender parity in the industry and hopes more women will be encouraged to pursue opportunities and contribute in this space.

Thanks for chatting with us, Bernadette, can you tell us how did you get into the industry?

I have had an eclectic career path, but my interest started with acting. I was picked out of my school and participated in a workshop in the Abbey Theatre for a number of years. This whet my appetite for drama and performance. I love a good story and have had a passion for film since I was a child. I was an insomniac who stayed up late watching classic films. After college, I taught English in a secondary school in Ireland for a year and then moved to Japan. On my return, I did some work in The Communications Center in Booterstown and then went on to produce a series of television programmes. After that, I moved to America and got more involved in studying acting, screenwriting and film production. I acted in some plays in San Francisco and loved that and then turned my attention to writing and subsequently to directing and producing. It was an organic evolution actually. It makes my heart sing, to collaborate with others to bring stories to life on screen. Those moments when it all just seems to come together in a good way… are magic.

They certainly are… which leads right into our next questions: as a filmmaker, where do you get your inspiration?

My grandmother was a great storyteller and passed on her love of storytelling to me. Of course, my life experience shapes the stories I tell, but it goes beyond that. I have a vivid imagination, and I draw from my observations of how other people experience life and relationships. I am naturally very curious about people, their life experiences, and what drives or motivates them. Impactful books and films have also influenced my writing. All the impressions left on the hard drive of my brain and those etched in my heart, over the years, converge on to the page in the stories I write. With Love on the Line, it is lovely when people tell me, as they frequently do, that the story resonates with them too.

Vert well said! So what prompted you to write Love on the Line?

I watched how the Internet and online dating were profoundly impacting and changing the way people communicate, relate and date. I thought it would make a good topic for a film. As I wrote, two characters emerged on the page and I just went with it. It was about love and trying to find love or relationships that last. I found myself drawn to developing the characters of these two sisters from Ireland and how their lives unfold in California. That became the main story and online dating became more of a backdrop. One of the sisters (Stephanie) is a sociologist doing research on online dating as a phenomenon and the other sister (Maggie) is a restaurateur.

How did you put the budget together to get this film across the line?

I wish I could say there was an easy answer to that one, but that is the really hard part. Blood, sweat and tears! It took a lot of knocking on doors, hearing lots of no’s and the heartening but rare “yes”. Sometimes potential investors can be fickle, they tell you “yes” and then they don’t follow through. That’s just the way it goes sometimes, but it is disappointing. Those hurt more than the No s, because you get your hopes up. I was fortunate in that people seemed to like the story and the script so that helped open some doors for me. Some of the Irish community in San Francisco were quite supportive of the project and helped me network and some offered locations to shoot which was wonderful. I also invested some of my own money, probably more than was wise, which I don’t recommend, but that’s what you do when you are passionate about a project. I shot enough for an early trailer in the first weeks, to have something to showcase the project. My approach was coming to accept it as incremental. How do you complete a marathon, or a long hike, it may be a cliché but it is true.. you do it one step at a time.

I loved it. It was thrilling, nerve-racking, utterly exhausting, intense, but in all pure joy. We had a great cast and crew of really talented people collaborating, and there was a lovely atmosphere on the set where everyone wanted to do their best work.

Why is this film so important at the moment?

This film celebrates love and hope. I think it is particularly relevant right now, as people have reevaluated what is most important to them during lockdown. I think people are prioritizing relationships, love and the need to connect. The Internet and the ability to connect in terms of Zoom and online dating have grown exponentially. More people than ever before are exploring online dating. Love on the Line explores how it can be a mixed bag, but sometimes it can work out.

I also think this film is important because it was written, directed and produced by a woman, and an Irish woman. We so need more women engaged in the industry to help offset the enormous gender imbalance that exists. So few films are written directed and produced by women globally. It’s great that Screen Ireland has made a commitment to this task and to proactively encouraging more projects by women writers, and directors. I have a couple of projects I am currently working on and I hope to shoot these in Ireland as there is a wealth of great talent here. We are blessed to have that in Ireland.

What has the reaction been at festivals?

I haven’t done much on the festival front yet, but am open to exploring that further. I know some of the larger international festivals are harder to get into, unless you are very well connected which I am not. The smaller ones are good for networking. Right now, I am more focused on getting the film out there through distribution channels, though that is all quite disrupted now with Covid. Thankfully I am making progress and the RTE broadcast is the start of a more global roll out planned for 2021.

Thanks so much for chatting with us, Bernadette. We look forward to being inspired in the future by your work!

Watch Love on the Line on the RTE Player here – but hurry, there are only a few days left to catch it. 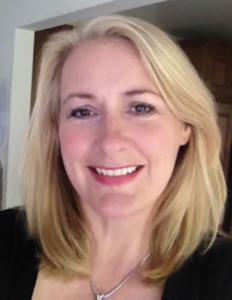 Bernadette McCarthy is a producer, director, actor and writer. She has a background in theatre, TV and film:  She founded Irish Dream Films, a company dedicated to producing high-quality content, for the large and small screen, that entertains, engages and inspires hope.  Originally from Dublin and currently based in Ireland, she has lived and worked in Europe, the US and Asia, and considers herself a global citizen who imbues her work with a spirit of inclusivity. She is engaged in several projects that focus on increasing opportunities for women, enhancing cultural collaboration, in celebrating differences, and finding common ground. She has a play, and a miniseries under development. Bernadette led a talented team through all phases of production from pre to post, to produce a high quality feature film, Love On The Line, which entertained audiences in screenings in San Francisco and New York. With theatrical releases on hold because of the pandemic, Love On The Line had a World Network Premiere on RTE 1 on December 19th. This broadcast kicks off a global online roll out.  With the low numbers of women writers, directors and producers, Bernadette is delighted to have been able to write, direct, produce and act in this film.