Inequality in 700 Popular Films: Examining Portrayals of Gender, Race & LGBT Status from 2007 to 2014

Each year, USC Annenberg’s Media, Diversity, & Social Change Initiative produces a report examining gender and race/ethnicity on screen and behind the camera across the 100 top‐grossing fictional films. A total of 700 films and 30,835 characters have been analyzed across the 100 top‐grossing films of 2007, 2008, 2009, 2010, 2012, 2013, and 2014 (excluding 2011). All speaking or named characters were assessed for demographics, domestic traits, and hypersexualization. For the 100 top movies of 2014, we also examined qualitatively whether characters were portrayed as Lesbian, Gay, Bisexual, and/or Transgender (LGBT).

Turning to behind the camera, the gender of directors, writers, and producers of the 100 top films of 2014 was assessed. We also examined female and Black directors working across the 700 top films. This year, the prevalence of Asian directors was noted across the most popular movies as well. To date, this is clearly the most comprehensive longitudinal research report on gender and race/ethnicity across 700 top‐grossing films. Only differences of 5% or greater are noted to avoid making noise about trivial deviations (1‐2%).

Race/Ethnicity. Of those characters coded for race/ethnicity across 100 top films of 2014, 73.1% were White, 4.9% were Hispanic/Latino, 12.5% were Black, 5.3% were Asian, 2.9% were Middle Eastern, <1% were American Indian/Alaskan Native or Native Hawaiian/Pacific Islander, and 1.2% were from “other” racial and/or ethnic groupings. This represents no change in the portrayal of apparent race/ethnicity from 2007‐2014.

Across the 100 top films of 2014, only 5 of the 107 directors (4.7%) were Black. One Black director helmed two pictures and only one was female. Only 45 Black directors have been attached to the 700 top‐grossing films. This represents 5.8% of all helmers in the years analyzed.

Only 19 Asian directors worked across the 700 top‐grossing films. This is an overall percentage of 2.4%. Only 1 Asian director was female across the films analyzed and was listed as a co‐director.

LGBT. Across 4,610 speaking characters in the 100 top films of 2014, only 19 were Lesbian, Gay or Bisexual. Not one Transgender character was portrayed. Ten characters were coded as Gay, 4 were Lesbian, and 5 were Bisexual. Only 14 movies sample wide featured an LGB depiction and none of those films were animated.

Of the LGB characters coded, nearly two‐thirds were male (63.2%) and only 36.8% were female. LGB characters were also predominantly White (84.2%). Only 15.8% were from underrepresented racial/ethnic backgrounds.

Click on the images below to view in larger format 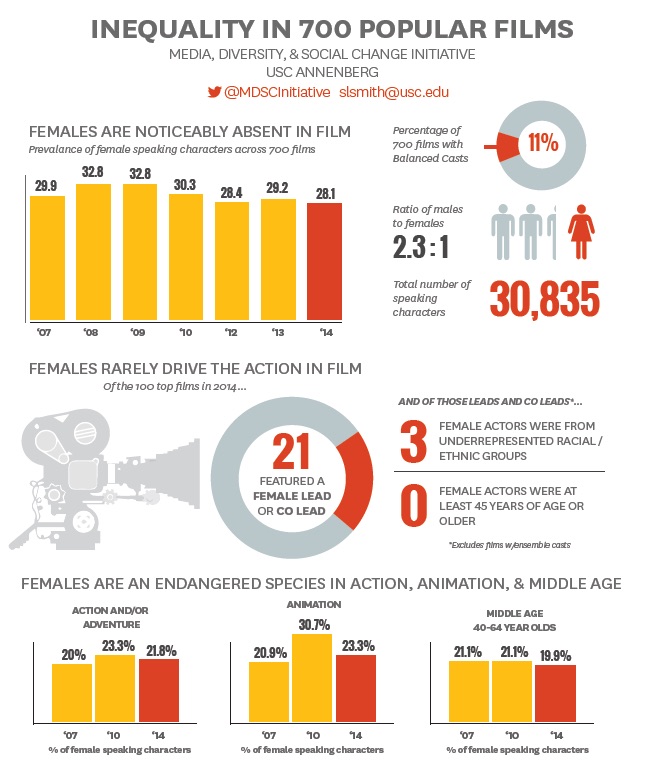 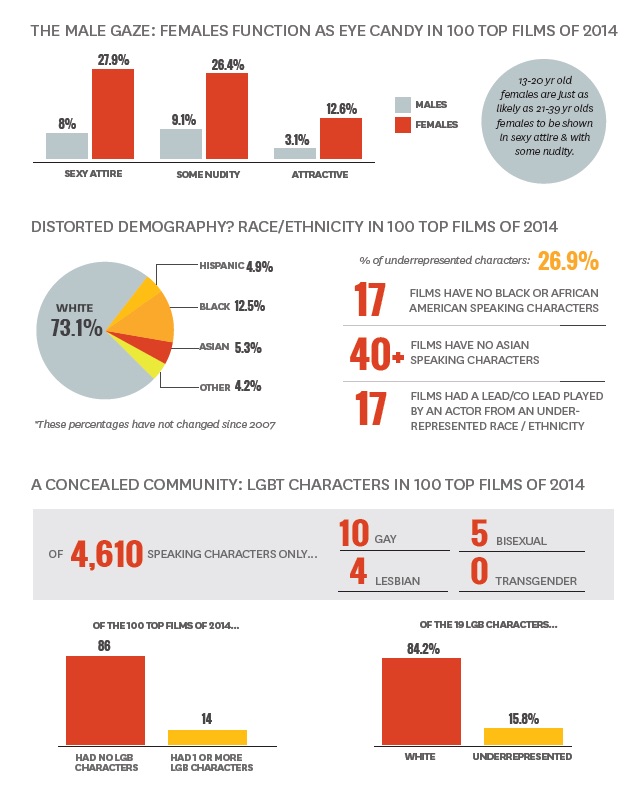 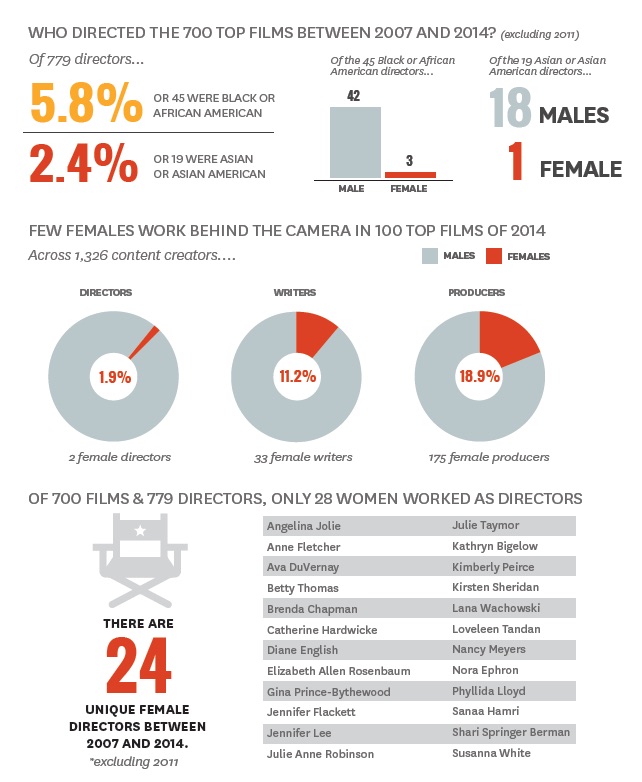