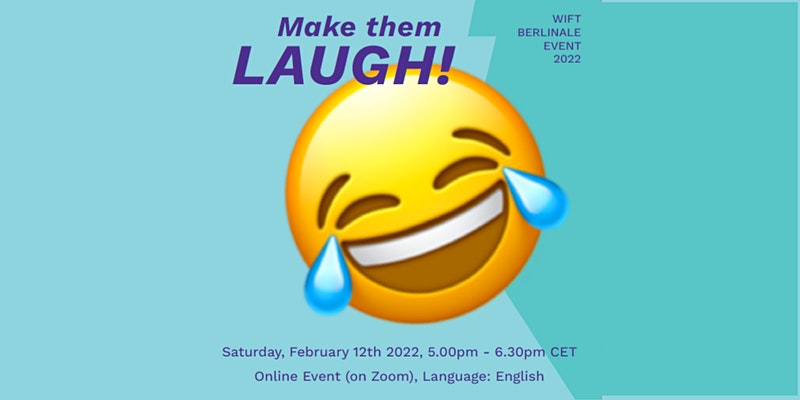 On 12th February, Producers and WFT Board Members Liz Gill (Deadly Cuts) and Fiona Kinsella (Tile Media) are hosting a special local session at the WIFT Germany Berlinale Event 2022. They will be joined by Deadly Cuts Actor Eriicka Roe and Producer Ciara Appelbe to discuss the industry, their fantastic hit feature, Deadly Cuts, as well as all things comedy!

Humor is an essential part of the most successful content of the film and TV industry.

To laugh is a lot of fun. It unites people, it gives audiences a great time. However – to create great humor isn’t always a walk in the park. To be funny can be a serious and challenging business.

Time to look into the roles of women who create the things that brighten our days with laughter and fun.

Meet comedy experts for a personal conversation with you!

At this annual Berlinale event, WIFT Germany and many international WIFT Chapters are hosting sessions with small groups featuring their local talent and experts on anything comedy in our industry.

Starting with quick keynotes by our inter/national experts from different fields in our industry: writing, directing, composing, acting, casting etc., you will have the opportunity to discuss your most pressing questions with them directly.

You are cordially invited to join us to expand your personal network and to have a good time!

Nicole Ackermann – Chairwoman of the Board WIFT Germany, Member of the Executive Board WIFT International

Acclaimed industry professionals both in acting and in creating successful features and series will join us for a conversation about comedy – what goes into creating funny characters today, and how comedy connects us all.

Each Queen’s Table will be hosted by a WIFT Chapter presenting a special guest acclaimed in the field of comedy and a moderator. The audience at each Queens’s Table is cordially invited to be part of the conversation.

Lena Kettner (PR and Marketing Manager for Prokino, a German distributor of international and national independents)