Jessica Chastain Pens Essay From Female-Helmed Movie Set: No One Feels “Left Out or Bullied”

Writing for The Hollywood Reporter from the Prague set of ‘ The Zookeeper’s Wife’ (Focus Features), the Oscar-nominated actress reveals the good things that can happen with a woman director (Niki Caro). For starters, more females get hired: “This comes from when women in power make room for other women.”

This story first appeared in the 2015 Women in Entertainment issue of The Hollywood Reporter magazine.

By Jessica Chastain, as told to Pamela McClintock for The Hollywood Reporter 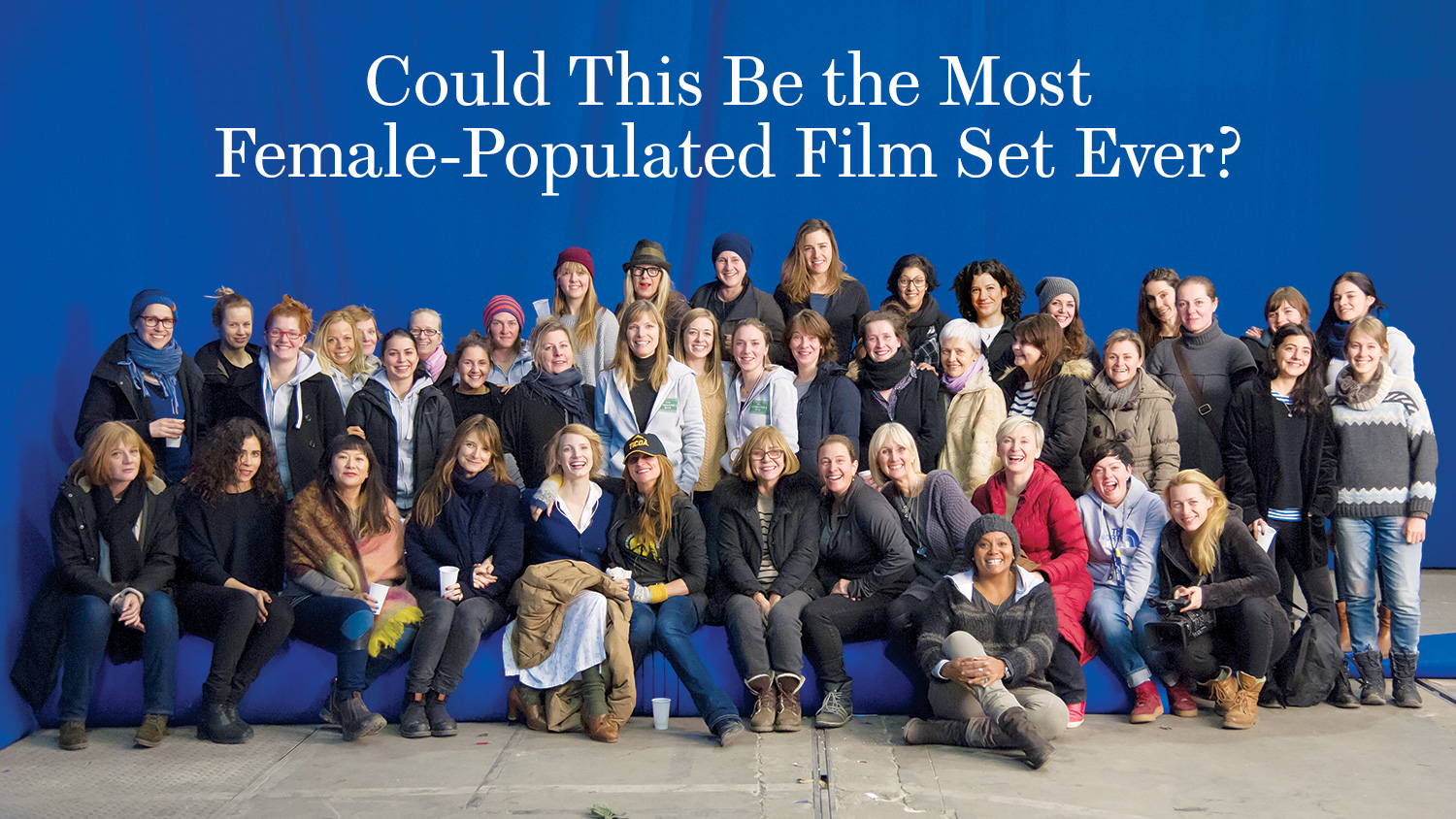 I’m in Prague filming a movie called The Zookeeper’s Wife with director Niki Caro. I can’t tell you — it’s amazing. I’ve never been on a set with so many women. We’re not even 50 percent of the crew — we’re probably something like 20 percent women and 80 percent men — but it’s way more than I’ve ever worked with on a film before. There are female producers (Diane Levin, Kim Zubick and Katie McNeill), a female screenwriter (Angela Workman), a female novelist (Diane Ackerman), a female protagonist and a female director. I’ve never seen a female camera operator like Rachael Levine on one of my films. And I’ve never, ever seen a female stunt coordinator like Antje “Angie” Rau.

Usually on a movie it would be me and maybe two or three other women, even though there are 100 people there. It’s crazy. I loved making the movie Lawless — it was a very masculine story about three brothers — but when Mia Wasikowska showed up on the set, I ran into her trailer and yelled, “It’s a girl!” I was so happy.

Chastain (left) on the set of ‘The Zookeeper’s Wife’ with Caro. The film is based on Ackerman’s nonfiction book about Antonina Zabinska, who along with her husband, Jan Zabinski, ran the Warsaw Zoo during World War II. The couple saved hundreds of people, and animals, by hiding them in zoo cages during the Nazi invasion. Focus is set to release the movie in 2016.

Some people might say a woman can’t direct this because of that, or a man can’t direct that because of this. I don’t like to do that. Look at Kathryn Bigelow: She can do incredible action films. Or Anthony Minghella, who directed the most beautiful, sensitive romances. For me, sex really isn’t the qualifier in the way someone directs — but I just know that when you have a set with predominantly one gender, whether it be all men or all women, it’s not going to be a healthy place. I imagine it’s the same thing in the workforce or other environments: When you have both genders represented, then you have a healthier point of view. The energy is great, you all are working together as a community, and everyone is participating in the exchange of ideas. You don’t feel a hierarchy; you don’t have anyone feeling like they are being left out or bullied or humiliated. Sometimes being the only girl on a set, you can feel like a sexual object.

I was talking to other actors about this recently, and the wonderful thing about having so many women on set is there hasn’t been anyone who has screamed or anything like that. It’s a very collaborative experience, and it’s been heaven for me. We all hang out all the time — there are no strange power plays or egos. We know how rare making this kind of film is. We’re giddy with happiness.

I don’t think it’s a fluke. If you look at the people who put the film together, it’s a lot of women who have had a difficult time in the industry, so of course they are going to want to be on a set where they aren’t the token woman, where there are more voices. And I’m positive that just comes from the women in the power positions making room for other women. Of course, Niki and producers Diane and Kim are not going to think it would be strange to hire a woman — I’m sure that probably helped matters.

From left: Production designer Suzie Davies and producers Jamie Patricof, Levin, Zubick and McNeill
on the set of ‘The Zookeeper’s Wife,’ which recently wrapped shooting in Prague.

I want to make sure I’m contributing to cre­ating diversity in the industry. I want to work with anyone who is talented, but I know that some people have to work harder to succeed in this business than others. I did Texas Killing Fields with Ami Canaan Mann, Zero Dark Thirty with Kathryn Bigelow, Miss Julie with Liv Ullmann and now Zookeeper’s Wife with Niki. And I’m doing another film with a female director that’s not been announced yet. I read this incredible article Chris Rock did [in the Dec. 12, 2014, edition of The Hollywood Reporter] where he talked about race in Hollywood, and he said that if there is an African-American who needs help, he’s going to be way more into helping them because he understands they don’t have the opportunity that other people do.

In this industry, female filmmakers have had a really hard time of it. Niki Caro should be directing everything right now — she’s worked for so long and is incredible, and her movies are great — yet she has not been given the same opportunities a man would. I don’t want to be part of the statistics when only about 4 percent of Hollywood studio movies are directed by women. I don’t want my percentages to be the same as the status quo.

It’s like Viola Davis said in her Emmy speech: The only thing that separates women of color from anyone else is opportunity. It’s the same situation with female directors versus male directors — they are not given the same opportunity. There was an incredible essay I read in Lena Dunham’s Lenny newsletter by Ellen Pao, the former interim CEO of Reddit. She talks about sexism in the technology world and that it’s so bad you don’t even realize it’s happening. People want to hire their friends and people they get along with, and if there is a company that has a lot of men, and the men are always hanging out together, those are the men who are going to be promoted. It was an incredible essay, and I think it applies to all industries.

Levine, a camera operator, on the set of the movie, which was adapted for the big screen by Workman.

If you look at the studio system and the American film industry, people want to work with their friends. If men are predominantly the ones working, they are the ones being given the opportunities more than women.

I’m about to go work with John Madden again, whom I absolutely love. There are so many men out there who are the most sensitive, beautiful and supportive people ever. But I’ve been on sets a couple of times where I’ve noticed that if I have an idea about a scene, I have to go through the male actors to be heard. It’s really annoying. The male actor will have a better relationship with the male director, so I have to get the actor on my side. That’s the only thing that sometimes feels very icky.

Many times a movie gets tested before it sees the light of day, and I’ve starred in movies that test much better with women than they do with men. But the problem with that is the majority of critics are men, so those movies that test really high for women are then having men critique them. And it means we need more female critics — we need to level the playing field here.

I do think things are changing. The reason I think they are changing is because whenever I talk about these issues with men I know in the industry — they are very talented, really intelligent and very successful men — there’s this embarrassment. They say, “I don’t understand how it got to be like this.” And I think that is what will help things change because it takes the group that is the majority in the industry to say, “Wait a minute: Maybe it’s more interesting to have more female voices in the executive suite and not just a token woman.”

It’s not a valid excuse to say women don’t call asking to direct superhero movies. Every female director I’ve asked if she’d be interested in directing a big movie like that says, “Hell, yeah.” And if that’s true, it shows how deep-seated the problem is. I don’t think the problem is women; it’s the representation. It goes to the agents. It has to change. This is 2015.