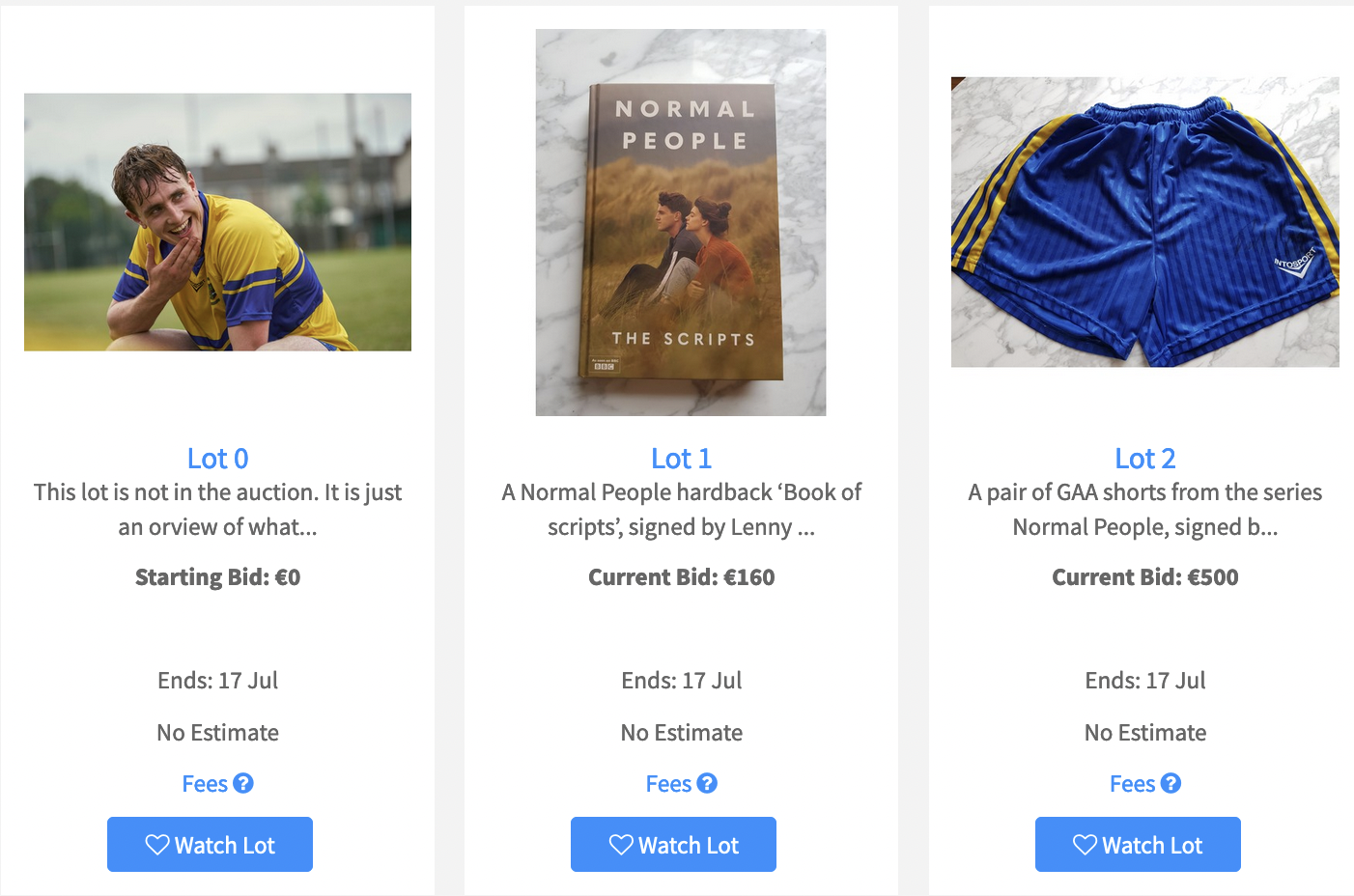 As part of a campaign organized by the independent Irish group Filmmakers supporting Filmmakers led by several WFT Members, Element Pictures and director Lenny Abrahamson are donating several props from the multi award-winning series Normal People to a unique auction in support of filmmakers affected by the crisis in Ukraine.

The props for auction include signed GAA shorts, a signed script of the first episode and a signed hardback book of scripts, featuring photography by Enda Bowe.

The Screen Ireland-supported Normal People was BBC’s most streamed show of 2020, racking up 62.7 million streams from its launch in April to December. The show and the creative team behind it have multiple award nominations and wins at various prestigious ceremonies including the Emmys, BAFTA, Golden Globes and IFTA.

The auction is open online now until closing on Sunday July 17th at 6pm.

The Normal People Auction is being organised by WFT Member Órla Murphy, who in March 2022 gathered a group of independent Irish filmmakers, including Brian Deane, Brendan Culleton, & fellow member Roisin Kearney and Irina Maldea, to raise funds and awareness about the ongoing crisis in Ukraine. The group already raised just over €10,000 to support their impacted colleagues, attracting support from all corners of the industry. Supporters include representative bodies (Screen Directors Guild of Ireland, Raising Films, Screen Producers Ireland, Women in Film & TV Ireland, Animation Ireland, Set Decorators Guild), the Lighthouse Cinema and international sales agents, alongside crew members, directors, writers, producers, production companies. Events to engage the general public have included the sale and raffle of props and costumes donated by Shinawil, Brown Bag Films and Newbridge Silverware, along with a gala screening by the Lighthouse Cinema, Element Pictures and Eureka Film & Video.

Several Ukrainian filmmakers currently in Ireland contacted the group and Órla has put these filmmakers in touch with Screen Ireland and Screen Producers Ireland. Networking initiatives and training opportunities are currently being prepared to help integrate both Ukrainian and refugees from other countries into the Irish film industry. All involved in the project are giving their services pro bono.

Órla Murphy said: “In sending these funds to our fellow filmmakers we are also sending a message of solidarity, hope and respect.”

Ed Guiney, Founder and Company Director of Element Pictures said  “What is happening in Ukraine is utterly devastating. Along with Lenny Abrahamson, we at Element are proud to be supporting these charities and admire their brilliant work to help film makers.”

Darya Busel Chief Programmer of the Ukranian documentary filmmaker festival Docudays.ua, said:  “For the past four months, Ukrainian filmmakers are risking their lives and mental health to document the atrocities of war and let the world know about the war crimes, but not only that – they are gathering footage for future films. I’m sure the films that will emerge from the work that is being done now, will help us to understand this historical moment, when the whole world has to reconsider the principles on which it is built.

These films to come, will help us to face our traumas and to reconnect with ourselves. Because the worst thing the war is doing to you is that it takes your life from you. In every possible way; you can no longer plan anything, you are parted with your loved ones, you lose your home and everything you’ve been working so hard your whole life for… and in the end, one day, you can even be killed. It’s true that maybe cinema cannot change anything in the short term but it can definitely change a lot in the long perspective. On behalf of our colleagues in Docudays and in Ukrainian film, I am very thankful to all who donate to support us in doing this important work.’

Orwa Nyrabia ICFR Ukraine said: “We established ICFR because we believed that film people everywhere are a community, that attacking one film person anywhere is an attack on all of us, that with such acts of solidarity we can show the whole world that film people will stand up for each other. With our Irish colleagues efforts, that faith is renewed. The plight of our Ukranian colleagues today concerns all of us, and no matter how small or bg our contributions can be, they first and foremost send a message that is not financial; ‘we are with you, you are not alone’.