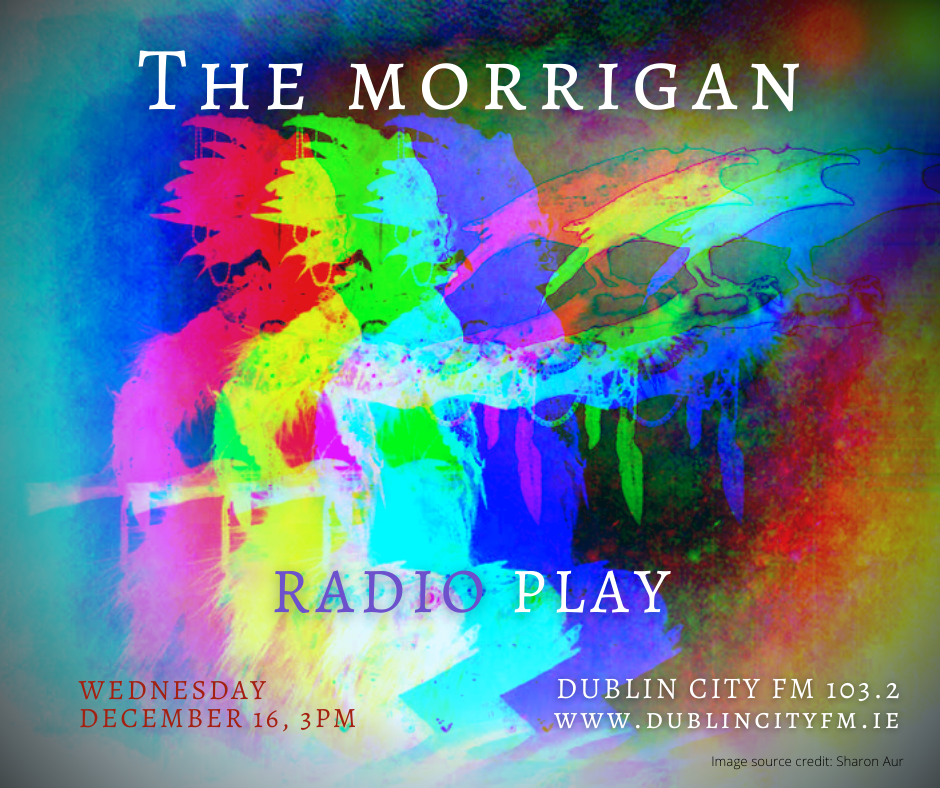 “Sometimes it’s the worst thing to find what you’re looking for
‘specially if you don’t know what to do with it.”
﹣Peader the Seanchaí in The Morrigan
“The Morrigan” a radio drama directed by our very own Marissa Aroy, brings to life Ella Young’s world of Celtic myth, spiritualism and the fight for Irish independence. The Morrigan will broadcast on December 16th, 2020 at 3:00PM on Dublin City FM Radio Station 103.2

Celebrating the centenary of the dramatic adventures of poet and Irish mythologist, Ella Young, this hour-long radio drama, The Morrigan, brings to listeners Young’s life in Ireland in a time of great upheaval. Based on the biography of Ella Young by Dorothea McDowell and Ella Young’s own memoir, Flowering Dusk: Things Remembered Accurately and Inaccurately, the drama weaves together historical fact with mythological fiction.
The Morrigan blends Irish mythology and history to tell the story of  Ella Young and her real-life friendships with historical icons such as Maud Gonne and Constance Markiewicz, George Russell (‘Ӕ’),  the poet W.B. Yeats and Pádraig Pearse. Ella is never quite accepted by her compatriots in the fight for independence but she’s also shunned by her presbyterian family as she joins the theosophical society, a recognised  Druidess and a self-proclaimed “pagan”.

With the end of World War I, in the plague of the Spanish Flu, Antrim-born Ella meets the goddess Macha in the cave of the red steeds. Macha is goddess of war, fate and death, crone goddess of The Morrigan (a Celtic Trinity). Macha tells Ella that “Dublin will burn!”
We follow Young, Gonne and Markievicz through the Easter Rising, the War of Independence from the British Empire, and the ensuing Civil War (as anti-treaty rebels fight for a fully independent 32-county State).
Haunted by Macha’s deadly insights Ella becomes deeply involved in Irish Independence. The Morrigan reveals Ella Young’s experiences spiritual and historical in this seminal historical period, one woman’s battle for a country she would hope to love but one which may not love her back.

The Morrigan brings several accomplished actors on the “wireless.” Clelia Murphy (Fair City) takes on the triple role of voicing Ella Young, Ella’s Memoir, and the goddess Macha. Serena Brabazon plays the iconic Maud Gonne, and Madi O’ Carroll plays the venerable Countess, Constance Markiewicz. Alf McCarthy is W.B. Yeats, Paul Nugent plays the poet ‘Ӕ’, and Rónán Byrne Is Pádraig Pearse and also the Seanchaí, while Robert (Ella’s principle antagonist) is played by Donal Gallery. The Morrigan is directed by Emmy-award winning director, Marissa Aroy (Sikhs in America).
Written by Daniel Brennan, the script was originally created for film. “We spent a few years raising funds and trying to get the film made, but the nature of the story is that it would have been a very expensive period film to produce. Eventually, we decided that a radio drama would allow us to keep the sweeping scope of the story and not have to be compromised by budgetary constraints,” said Brennan.

Executive Producer Tony Phillips brought the story to Daniel Brennan several years ago. “Dorothea McDowell was a friend of my mother’s. After her divorce, she studied Women’s Studies as a mature student at UCD where she discovered Ella Young, the druid warrior. Ella became an obsession and ten years later she published Young’s definitive biography “Ella Young and Her World: Celtic Mythology, the Irish Revival and the Californian Avant-garde”. This play is based on Dorothea’s book and on Ella Young’s autobiography, published in 1945: “Flowering Dusk: Things Remembered Accurately and Inaccurately.”
The Morrigan will have its debut radio broadcast on Wednesday, 16th of December at 3:00 PM on Dublin City FM 103.2.