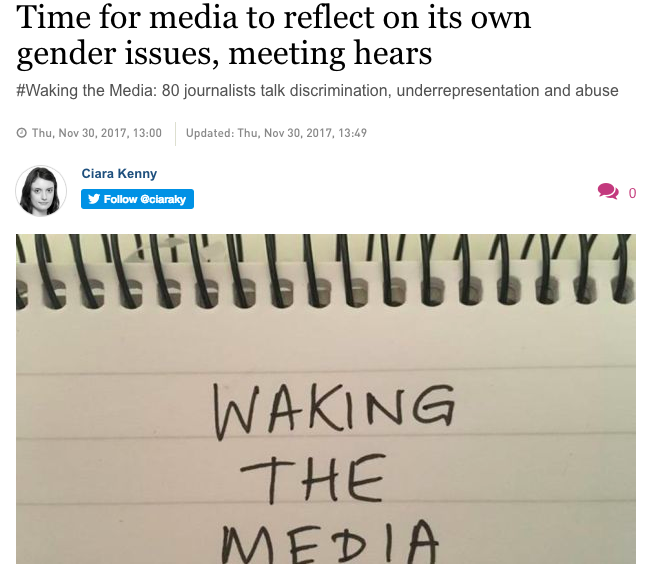 We’re very proud that our co-chairperson Sarah Kieran, who is also spearheading Amplify Women’s activity, was asked to speak at this week’s inaugural ‘Waking the Media‘ meeting.

Sarah was also featured in the Irish Times Women’s Podcast this week which you can listen here. She’s some woman for one woman!

At a time when the media is reporting on abuses of power in the arts and entertainment world, it is necessary now for the media to examine its own policies on harassment, gender discrimination and underrepresentation in the industry, a meeting in Dublin heard last night.

More than 80 women met at the Project Arts Centre for the Waking the Media event, organised by Irish Times columnist Una Mullally.

“The news media is reporting on this massive movement globally that is calling out sexism and abuse, but it is often very slow to reflect on itself. I don’t think we can fairly judge and comment on practices in other industries if we do not reflect on ourselves,” Mullally said.

“Unless we have an open conversation about everything from that ambient misogyny to lack of opportunity, lower pay and all the way up to harassment, gendered bullying and abuse of power, we don’t have a leg to stand on when we are pontificating about theatre or Hollywood. ”

She said other sectors had taken a proactive approach, putting out statements and generating policies about workplace practices that can discriminate against women.

“I think it is curious that media organisations have not done that.”

Ms Mullally said the National Union of Journalists has given their support to the Waking the Media movement, and expressed interest in carrying out a survey of women journalists in Ireland about their experiences working in the industry, similar to one conducted recently in the UK.

The audience for coverage of women’s sport is evident, but if only 12% of decision makers in Irish media are women, the structure relies on men to provide a platform for women’s perspective #WakingTheMedia #SfBWomenInSport

During the audience discussion, a common concern was the lack of female representation in leadership positions in Irish media organisations. There were calls for gender audits at all levels, including the percentage of female voices on air, and columnists in newspapers.

Noelle O’Reilly, spokeswoman for Women on Air, an organisation which trains women to speak in the media, told the audience that the need for gender quotas in the media should be investigated.

Similar quotas in politics appear to be working, she said, and if the media don’t introduce them, even on a voluntary basis, “it will be a long time before parity is achieved” between male and female voices on television and radio.

Sarah Kieran of MediaLawyer.ie, who is also co-chairwoman of Women in Film and Television, said the media industry had a strong culture of freelancing and zero-hour contracts, but it is important for journalists to know that laws around harassment and abuse “apply equally to freelancers as they do to people in permanent positions”.

Theatre director and activist Grace Dyas spoke about her experience publishing allegations of bullying and harassment against former Gate Theatre director Michael Colgan on her own blog, and the restrictions the media is under legally when reporting on such issues.

Set designer and arts manager Lian Bell, who started the Waking the Feminists movement challenging gender imbalance in Irish theatre, stressed the importance of women working together to effect change in the industry.

“It can be very hard to be the first person to speak up, but finding your peers makes it a lot easier to do that,” she said.

An anonymous survey of the Waking the Media audience, asking about the one thing they thought needed to change in the industry, will be published online. Another meeting is planned for January.

This is a starting point for a broader conversation about representation in the media, Ms Mullally said.

“We need to look around our newsrooms and our radio stations and examine who is telling our stories, because if they are all coming from the same point of view, then we are not getting to the truth of the country we live in.

“It is about class, race and ethnicity, gender identity and sexuality, disability, illness representation, differing faiths.

“Audiences are fleeing traditional media because they are not being served and not being represented,” Ms Mullally said. “We have to get across to media organisations that proper representation is not only good for discourse, but good for business.”